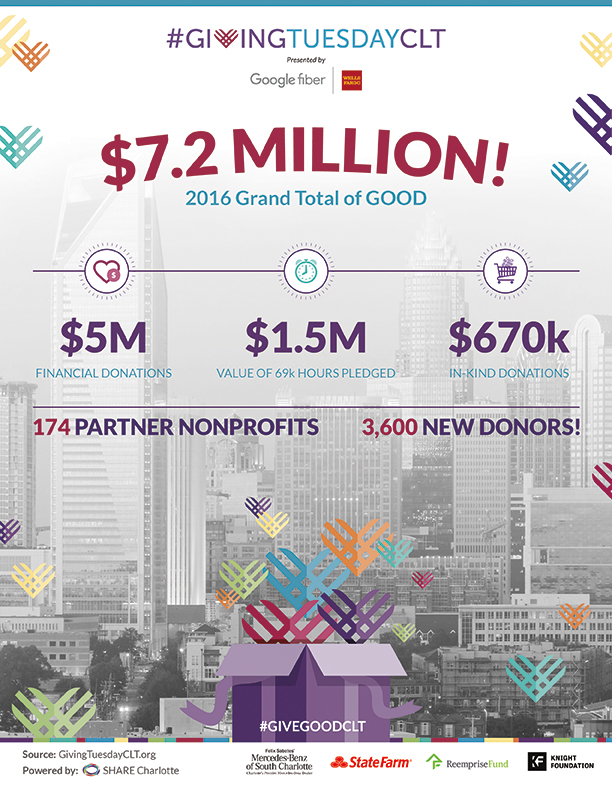 The two-week #GivingTuesdayCLT campaign (Nov. 15 - 29) was co-presented by Google Fiber and Wells Fargo and encouraged the Charlotte community to give to local nonprofits. SHARE rallied more than 170 nonprofits, 80 local businesses, sponsors and community partners spanning from Lake Norman to Center City to Ballantyne -- with a unifying goal of doing good for Charlotte.

“#GivingTuesdayCLT is the biggest #GivingTuesday city campaign of 2016. We’ve been so inspired by the way the entire Charlotte community has rallied around this campaign. From the donors to the nonprofits to the large companies and small merchants, they’ve really shown the country the true spirit of Charlotte,” said Jamie McDonald. "I am overwhelmed by the generosity of our Queen City,” says Kelly Brooks, Founder of SHARE Charlotte. “We all needed something good to rally around and the fact that so many wonderful nonprofits benefitted is truly special.”

"We are proud to support SHARE Charlotte and this effort to fund nonprofit organizations that are doing good work across Charlotte,” said Kendall Alley, regional president for Wells Fargo. “Investing in our communities and leading by example is one of the most important things we can do as a company. Our goal is to help build strong and vibrant communities, improve the quality of life, and make a positive difference.”


"As we continue to build out our network and connect more and more Charlotteans, Google Fiber is excited to support great organizations and events like #GivingTuesdayCLT. We believe in SHARE Charlotte's vision that everyone can be a philanthropist and that every gift is important,” said Jess George, Community Impact Manager, Google Fiber-Charlotte.

While the donations raised during the campaign are certainly monumental, SHARE encourages the community to give all year round. Nonprofits always need help, financial support and love from the community in order to keep doing their great work.  Learn more about and connect with Charlotte’s nonprofits at SHAREcharlotte.org.