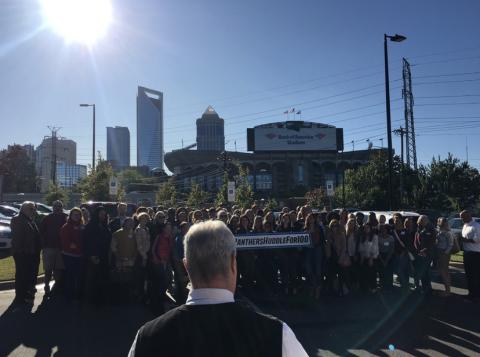 Ross Danis admits he teared up when he learned Meck Ed was getting a check for $1,000 from the Carolina Panthers.

“I could just cry. When you run a nonprofit and you get a call like that, especially these days, it really did bring a tear to my eye,” Danis says.

Meck Ed works with high school seniors at some of Charlotte’s most challenged high schools getting them college and career ready.

This Charlotte nonprofit was one of more than 30 regional organizations that got the unexpected phone call from the Panthers - all thanks to a celebration of the NFL’s 100th anniversary season last year.

The Huddle for 100 initiative asked all the NFL teams across the country to promote volunteerism in their communities. The goal was for the teams to help log a combined 100 million volunteer minutes, and the winning team would be awarded a $100,000 prize from the NFL.

The Panthers teamed up with SHARE Charlotte last fall to inspire our community to log as many minutes as possible, with the hopes of bringing the prize home – and they came awfully close to winning it all.

Riley Fields, Director of Community Relations for the Carolina Panthers, says “We wanted to partner with SHARE to shine a spotlight on volunteerism, but also we hoped to provide critical funding that could benefit local nonprofits who are part of the SHARE Charlotte family.”

From April of last year right up until Super Bowl LIV weekend, over 30 nonprofits in the SHARE Charlotte family made significant contributions to the effort, logging more than 46 million minutes of volunteer time. Fields says, “That’s pretty significant considering that was half the league's original goal for all the teams put together.”

While the Panthers had their sights on finishing #1, they finished #3 in the NFL in total volunteer minutes, missing the grand prize by just two spots.   However, thanks to the nonprofits who reported their hours and activated on social media, the Panthers came in first place with the most reported volunteers (over 225K) and first place in social media participation.

Despite losing the NFL’s first place cash prize, the team decided to dig into their own pockets to thank the local nonprofits, awarding more than 30 $1,000 grants.

“There was so much enthusiasm with the partnership effort by all who were involved that we wanted to do something as a way to show our appreciation and gratitude. While we didn’t win the big grant, we wanted the  agencies to know they are valued for the many critical needs they serve in our community.  Our hope is that the micro-grants provide both an energy boost to the agencies and provide some additional resources to use in any way that benefits them or the folks they serve."

The money couldn’t have come at a more crucial time. The checks were delivered last week as the nonprofits work through the unexpected needs they are facing amidst the Covid19 crisis.

Meck Ed decided to use their grant money to help their high school seniors process the roller coaster of emotions they’re facing right now. The organization hired a psychologist to do a series of group therapy sessions. Danis says, “I was surprised at how open they were. They were all very talkative during the sessions and the psychologist was giving them strategies to cope.”

Green Box Solutions  - a nonprofit that works with seniors and their caregivers - received another of the Panthers micro-grants. The founder and director Erin Welborn, says, “I was so surprised! We were like woohoo! I’m a Panthers fan – born and raised here – so this is my home team – any unexpected windfall is great and it came at a great time.”

She and her all volunteer team used the money to make “Corona Kits” for 50 seniors with face masks, disposable gloves, soap, hand sanitizer and more. “It’s exciting and it makes me feel like I’m doing my part. We are helping people who may not know how to access masks and hand sanitizer and the team money helped make that happen. This is a big thing for us.”

The head of Healing Vine Harbor, Tracey Questell, said the same thing. “I was just so happy. We had no idea the money was coming.”

Questell’s nonprofit helps women who are homeless or displaced.

“We are a grassroots organization and right now we have women who were in danger of losing their homes. We used the money to help pay a woman’s rent and to help other women pay for their phone and electricity bills. We used it to help some women out of emergency situations.”

Fields says hearing the stories of how the money is being used is truly meaningful and is an added bonus to the enhanced relationships the team has established in the community through the program.

Nonprofits who received a $1K grant include:

Creating Exposure for the Arts

Girls on the Run Charlotte

Metrolina Association for the Blind

Parkinson Association of the Carolinas

Rebuilding Together of Greater Charlotte

Check out this message from Riley Fields, Director of Community Relations for the Carolina Panthers!