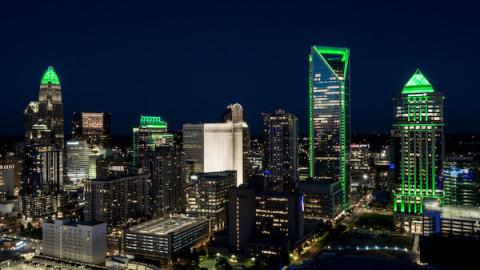 Joining global observances of Black Philanthropy Month (BPM), a local group came together in a big way this year, resulting in Charlotte prevailing as the most engaged city, worldwide. New Generation of African American Philanthropists (NGAAP), a Charlotte-based philanthropic collective, teamed up with My Brother’s Keeper-CLT-MECK, the National PanHellenic Council-Charlotte Chapter, SHARE Charlotte and YMCA of Greater Charlotte to form a powerful collaborative, elevating the presence of Black-led nonprofits and generosity in Black communities.

Together, these five organizations launched #BPM2020CLT, a community-wide campaign throughout August 2020 to generate resources and support specifically for Black-led nonprofits during this year’s Black Philanthropy Month and beyond. Charlotte’s month-long campaign exceeded expectations in its first year.

#BPM2020CLT organizers launched the campaign by rolling out conventional fundraising strategies, leading a multimedia push, and tapping into Black cultural and social capital. The collaborative had already started planning in fall 2019 for August’s 2020 campaign, and like everyone else had no idea what 2020 had in store or just how timely their crucial work would be. I recently spoke with Valaida Fullwood, an NGAAP member and one of the campaign organizers, about factors contributing to the campaign’s success.

For the collaborative, success in its inaugural year centered on forging a broad-base of partnerships, devising a thoughtful digital campaign, and hosting a mix of compelling virtual events with nonprofits, funders and other stakeholders. Fullwood states that it was important for each of the collaborating organizations to bring their particular strengths, knowledge and resources to the joint effort. “While NGAAP had organized BPM events in Charlotte in prior years, joining forces with SHARE, MBK and the other groups for #BPM2020CLT increased our capacity exponentially, which made a significant difference in what we all were able to do to benefit our city and its nonprofit community.”

In fact, NGAAP recently released 8 Key Metrics from #BPM2020CLT on its website. The metrics speak to the success of the campaign on a variety of levels. Among the key takeaways was the high level of public interest in the campaign, as indicated by a surge of unique visitors to the SHARE Charlotte and NGAAP websites. During the month of August, SHARE reported nearly 16,000 unique visitors – the most for a single month in site’s history!

Another notable metric was the 40 promotional partners that joined the campaign. These included a wide-ranging mix of local businesses, charitable organizations and groups focused on amplifying social good. Promotional partners mobilized their internal resources, contributed dollars and helped to amplify stories of the campaign.

Record engagement in 2020, now sharpened sights on record funding in 2021

With news reports amplifying the pandemic’s disproportionately harmful impacts on Black Americans and the social justice movement ignited by the tragic death of George Floyd, there was heightened interest in supporting Black-led organizations in 2020. While the local organizers chose against setting fundraising goals in the campaign’s inaugural year and  subsequently they found that dollars contributed to Black-led nonprofits during August did not match the record levels of public activity and digital engagement during the month, the campaign was successful in producing other benefits and laying a foundation for longer lasting effects in years to come.

“Our #BPM2020CLT post survey revealed Black-led nonprofits received over $70,000 in donations and grants during August, with nearly half contributed on August 28th for our CLT Gives Black day of giving,” reports Fullwood. “In the same survey, 100% of respondents rated the overall campaign as positive, with 87% rating the effort ‘Good’ or ‘Excellent’.”

The greatest benefit Black leaders of local nonprofits collectively cited was the wider exposure. Fullwood shared that in spring 2020 NGAAP commissioned a comprehensive study of Black-led nonprofits that is still underway, with a final report slated for public release in 2021. The research seeks to provide deeper insights on local Black nonprofits, which often operate on the frontlines of our communities. NGAAP’s aim is to accelerate progress toward racial funding equity in Charlotte’s Black nonprofits and communities.

Timing and relationships are key

Efforts in Charlotte were buoyed by the national spotlight on racial equity. It also helped that NGAAP had held a longtime focus on social justice philanthropy and had been active with the larger BPM celebration in prior years. Months of advance planning helped the collaborative pivot relatively easily in the pandemic, respond effectively amid the country’s racial reckoning, and ultimately to have the impact they achieved.

The collaborative also benefited from strong ties developed among the lead organizations. Their intentional work on trust, candor and authentic connections helped the group navigate uncharted territory during one of the country’s most volatile periods. For now, we look forward toward 2021 and how Charlotte can scale up and keep it going.