This Foundation Shared The Spotlight, and $60K 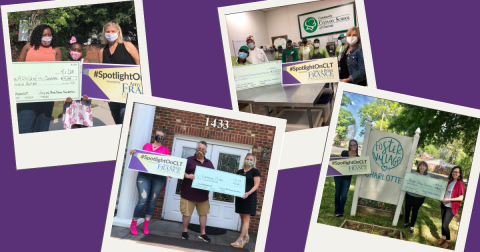 Shay Hunt burst into tears when she got the call that Raise a Child of the Carolinas, the nonprofit she founded just a year ago, had won a $5,000 grant through SHARE Charlotte from the Amy and Brian France Foundation. “Oh my gosh when they called me I started crying. I could not believe it, my voice was shaking,” Hunt said.

Raise a Child of the Carolinas is one of a dozen Charlotte area nonprofits gifted with this game-changing grant last year as part of SHARE Charlotte’s 2020 Spotlight Series, #SpotlightOnCLT. The Amy and Brian France Foundation sponsored the series this year and, in addition, awarded a $5,000 grant to a different nonprofit each month. Check out the announcement of this partnership for more details.

A spokesman for the foundation said, "The Amy and Brian France Foundation had an incredible experience partnering with SHARE Charlotte to power their #SpotlightOnCLT content in 2020!  Not only did SHARE help the entire Charlotte community gain a better awareness of our foundation and priorities, but through the community-directed monthly $5K gifts we were able to engage tens of thousands of people and support twelve additional Charlotte nonprofits in a powerful way.”

Beginning this past January, each month SHARE focused on a specific category of nonprofits and invited the community to vote online to direct the grand prize to one of the nonprofits being featured each month.  Raise A Child of the Carolinas won in August when SHARE’s #SpotlightOnCLT focused on Black Philanthropy Month.

“With us being a new nonprofit in the black community getting funding is the biggest struggle. We posted about the contest on social media and started blasting our friends with it trying to get people to vote for us,” Hunt explained.

It worked and Hunt says they’re putting the money towards vans that will offer much needed transportation for the kids they serve. The program offers educational opportunities for elementary, middle and high school students during school breaks. The idea is to expose them to things they might not otherwise have access to. “Our winter camps focus on the arts and we are teaching piano lessons. Many of these kids have never touched- some have never even seen a piano. For us to expose them to these things, we have to be able to get them there. Getting this grant was huge. It’s the biggest gift we’ve received since we started operating last year.”

Foster Village Charlotte, who won the $5K prize in March, is also fairly new and says the grant came at just the right time. Four area foster parents founded the nonprofit two and a half years ago to connect veteran foster parents to new ones and the pandemic changed the way they were able to reach people in need.

Co-Founder Becky Santoro “Before COVID we were doing support groups in person and this allowed us to hire therapists to do virtual visits. We knew that forcing kids into isolation who are already traumatized and away from their families was going to be very difficult and foster parents were forced to become teachers…visits with biological families stopped- we wanted to make sure our caregivers had support in place for them and this money helped us do that.”

She says it was a morale boost too when many of the organizations they were competing against joined forces to help make sure they won the money. “Some of the partner organizations said we’re not going after this because we want you to win. That was a boost of confidence to know that the other organizations recognize the value in what we do even though we’re still fairly new.”

Chef Ron Ahlert runs Community Culinary School of Charlotte and while they’ve been around for almost 25 years, he says this is the toughest year they’ve faced yet and the $5K this organization won in September was a lifeline that meant they could keep people employed.


The cooking school is a workforce development program for former prisoners trying to find work. They also run an onsite café, employing current and former students. Over the years they’ve had more than one-thousand students graduate. Most of those graduates go on to work in the hospitality field, but with the pandemic, the café is struggling. “Everyone in our industry is struggling and we are so grateful to SHARE. This grant helped us to keep our classes going and keep some of our alumni and students employed.”

The leaders at Campus Pride also invested in students with the prize money they won in June. The organization works to create safer environments for LGBGTQ students on college campuses across the country and this summer used their 5-thousand dollars to create a digital platform to interact with people despite the pandemic.  Executive Director Shane Windmeyer said, “I think it really gave us hope winning this. Right now we don’t know what’s going to happen.  Things are changing so rapidly, it’s hard to think about revenue and grants when you’re trying to get by day after day. This money and having people believe in us gives us hope that we’re gonna make it through this. We’re just very appreciative to Amy and Brian France and very grateful.”

The France’s said partnering with SHARE was a rare opportunity for them to reach hundreds of nonprofits in the Charlotte community through their #SpotlightOnCLT partnership.

“SHARE Charlotte over-delivered at every turn, and our investment in SHARE was an excellent way for us to make a broad, meaningful impact on Charlotte's nonprofit community in a year that was especially tough. We look forward to working with SHARE again in the future.”

There is still time to help give away $5K courtesy of the Amy and Brian France Foundation before the year is over. VOTE NOW for the local nonprofit you would like to see take December's #SpotlightOnCLT prize!
Share With Us!